Paul Carroll has been Involved with Amateur Musical Theatre since the age of 15 and spent his formative years treading the boards in Gilbert & Sullivan Operetta. He first got involved in producing shows in 1980 at age 22 and went onto direct his first show in 1987.

This first assignment was in difficult circumstances. He and the musical director were appointed with just 8 weeks left to block and stage "The Sorcerer". The show was performed on time as a very steep learning curve was climbed by all involved. Paul went on to direct most of the Gilbert & Sullivan reportoire, some operettas several times for different Societies.

He gained quite a reputation for his innovative touches to add modern day references to the productions to try and make the shows as relevant to the audience as possible. These included things like JCB diggers rolling onto the stage during a burial song in "The Mikado"; a remote control singing statue ancestor in "Ruddigore"; a complete comedy magic act in "The Sorcerer";  a scene from the Gondoliers set in the "Jerry Springer Show" with almost no dialogue changed; a whole Act set in the big brother house, also in "The Gondoliers"; a 10ft high Iceberg sliding across the deck of "HMS Pinafore" in a spoof of the Titanic, and no less than 2 Gondolas fiercly competing over business in "The Gondoliers".

With a growing reputation for adding comedy at every opportunity Paul delved  into Musicals. He directed shows like "Oklahoma", "Fiddler On The Roof", "My Fair Lady", "Kiss Me Kate", "Calamity Jane", "Hello Dolly". Most of which were big productions performed in Professional theatres.

With 25 directoral assigments under his belt Paul has took a break for a few years but then came back with a vengance. He directed a show written by friend Gerry Hunt in 2011, "Will You Still Love Me Tomorrow" a musical comedy about life in the early 60's. Then suitably inspired Paul got to work on writing his own musical comedy, "The Pier". As Paul put it " It seemed to make sense to me to bring the two hobbies I have had for most of my adult life together in this project, I am very excited at the prospect and my creative juices are in full flow"

The Pier opened on 30th April 2015 in what was a very intense week for Paul, he bought the multi million pound business he had worked for for 35 years on the same day. The Pier was very well received and, for Paul, it was nice to give something back to the place he grew up in.

Paul started writing songs for his next musical just 3 weeks after the Pier was staged. Well and truly bitten by the bug! "The Mysterious Death Of Martini The Magician" featured characters whose names were taken solely from well know brands of drinks. It was an effectionate spoof on the Murder Mystery Genre, with lots of familiar yet different characters, and enjoyed a succesful run in September 2017.

He has now written his 3rd musical which is a rock based sci fi spoof called "Wagon Wheel Seven" which sadly is currently on hold due to Covid19. This time the characters are all well known biscuits.

Needless to say Paul is already writing his fourth musical for 2023/4 which is a spoof of 1960's spy shows called "Hook, Line & Sinker". This time its all fish related.

If you are interested in any of Paul's Productions

or Albums and want to know more 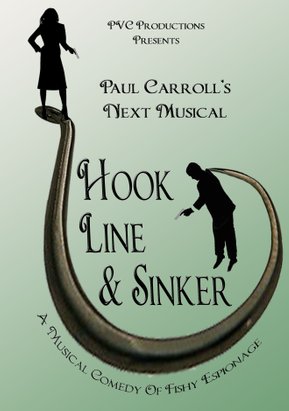